Çakal is one of our roller breeds. Çakals are known as "Çakal roller", "Cakal roler", "Rouleur de Cakal" etc. around the world. Also known as the "Nalbant" (horse-shoer) to old fanciers were kept by horse-shoers or blacksmiths in old Bursa. Hence the name "Nalbant". However, this name is not used or known much today. The name çakal comes from the breeds color similarity with Jackals (canis aureus). Color of this breed can be described as coffee scarlet and rust mix. Çakal name is also used for other breeds that has similar coloring in Turkey, like kelebeks. This causes some confusion. Besides this, the fanciers also tend to tread Çakals like a color variation of Bursas. Reality is these breeds look much similar as they could be one breed.

Çakals today have been greatly declining in numbers. In the Marmara and Thrace regions, where it is mostly kept, the interest towards the breed has been diminishing and resulting in breed's near extinct status. We can say, they are not kept outside of these regions in Turkey at all. Unfortunately, today they are part of several breeds in need of protection against extinction.

It is known that Tayyar Başaran of Tekirdağ/Çorlu, has been working on this breeds improvement for many years. Again, from Edirne, Metin Ayaz is also known for working on this breed for some years now. Even though, it is one of our performance breeds, because of its trade solely based on color and form in recent years, it is flight qualities has declined a great deal. In fact, Doç. Dr. Türker Savaş states that today's birds almost do not fly at all. This situation is closely related to the mind set of fanciers. The only breeder of Çakals in Ankara, Zeki Güleröz, has been working on the same bloodline since 1974. I have watched his birds in flight. I witnessed them fly for rather long hours. In fact, we experienced an interesting incident: Flown together with Bursas at 17:00, birds raised to be specs in the sky and around 20:00 they disappeared from eyesight. We could only see them with binoculars. Around 21:00 sky got dark, and the 20-bird kit did not return. Birds returned following day as the first lights of the day appeared, dropping from the sky one by one. We do not know where they spent the night.

We do not have any documentation on the history or the origin of çakal. Our knowledge is based on the comments of old fanciers only. According to these comments they are also known as Şehremini and Kocamustafapaşa birds. These two neighborhoods are share a border in the Fatih region of İstanbul. Apparently, they were kept in this section of the city in great numbers in past. Kocamustafapaşa, known as Samatya in the past, is a section of the city where minorities lived, mostly Greeks. Since the name Samatya also is a Greek name, it was changed to Kocamustafapaşa. Since we do not have any information on the origins of the breed one can assume it was brought over by Greeks from Balkans or some where in Europe. Based on these, we can say that the origin of the breed in Turkey is Istanbul. A German source states that çakal is known in Turkey for about 100 years.

Çakals, as far as their look, are very similar to Bursas. Their beaks are shorter and thinner compared to Bursas'. They are a clean-legged breed. Legs can not have any feathers below the knees. Breed only comes plain headed and no crests exist. Wings are carried above the tail. Eyes are light gray with blue streaks. Ring around the eyes is rather obvious and light colored. Body size is very similar to Bursa's. Main difference between Çakal and Bursa comes in the number of tail feathers and the oil-gland. Çakal's tail consists of 14 to 16 feathers and it does not have an oil-gland, where Bursa has 12 tail feathers and an oil-gland. 7-7 line-up in the white wing feathers is a desired quality in Çakals. Tail feathers must be only white. Small tail cover feathers on top and the bottom must be red and lined up to make a straight line against the bottom of the white tail feathers. There should not be any white feather on the colored parts of the bird including the head and under belly.

There are two color variations of this breed. One being yellow and the other red. Both colors come with white-tail and white-tail-white-wing markings.

Yellow:These are the birds which can be described as rust color. White-tail marking must be pure and not have any other color present. White-tail-white-wing marking also hast the primaries of each wing to be white color. 7 white feathers on each wing tip are optimal and there should not be any other color feather in between.

Red:Compared to yellows they are darker in color. Almost a scarlet red color. White-tail marking must be pure and not have any other color present. White-tail-white-wing marking also hast the primaries of each wing to be white color. 7 white feathers on each wing tip are optimal and there should not be any other color feather in between.

Çakals carry all flight qualities of other roller breeds. Despite its decline of performance in recent years they still fly and perform like Bursas. They roll deep and fly for a long time. A good Çakal should not fly less then 3 to 4 hours. 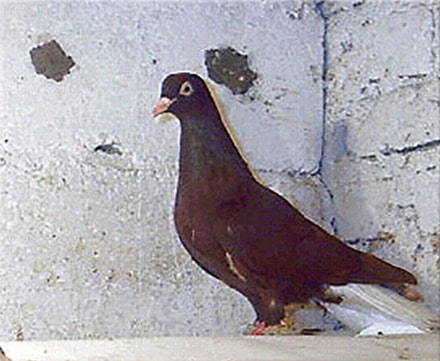