View might look familiar some how.It happens to be the background for the famous race seen in the last Star Wars movie.

In our country, compassion, in particular for doves, and in general, all kinds of birds living together with people in cities and depending on this emotion, willingness to help them are to a great extend common feelings among the citizens. According to Islam feeding birds and treating them well are good behaviors identified with acquiring merit in God’s sight. Therefore, people who act in such a way feel themselves more relieved. This tradition was inherited from the Ottoman Society. In the Ottoman Society, as a result of the religious belief, doves were considered as holly birds.

The holly event of prophet Mohammed which the prophet was helped by a dove when he was hiding in the cave while escaping from Kureyshies, and some hearsays such as, Hacı Bektaş-ı Veli’s transformation from human being to dove, carried out deliberately by himself during his journey from Horasan to Anatolia have always promoted the importance of doves on the eyes of Turkish people. Ahmet Haşim, a prominent Turkish writer wrote about ‘Haffaflar Çarşısı’ (Shoemaker’s Bazaar) in his novel, “Gurebahane-i Laklakan” (Sanctuary for Poor Storks) which was published in 1921. He narrated that, storks whose legs and wings were broken, crows which were senile, and any other kinds of birds which were injured gathered in the square which was in the middle of the bazaar and the artisans of the Bazaar has helped and taken care of them by collecting money among themselves for so many years.

According to the narration of Fazıl Hüsnü Dağlarca, a famous Turkish poet, a famous merchant from Sivas devoted two of his shops’ salary for buying feed for birds. Moreover, there is a bird hospital in the Garden of Dolmabahçe Palace whose roots were traced back to the Ottoman Period and which still exists today. It is possible to give plenty of such kind of examples. 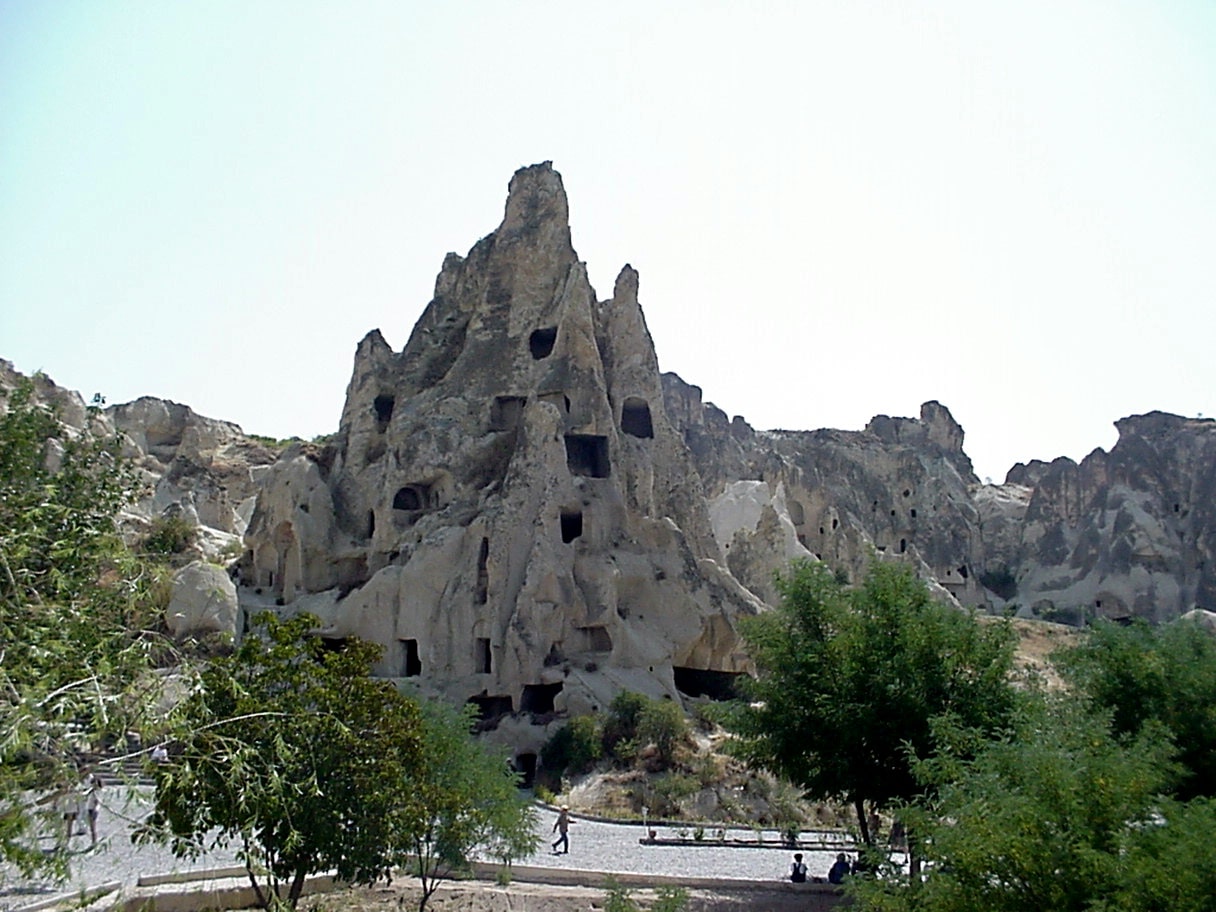 Several views of the pigeon valley and the fairy towers 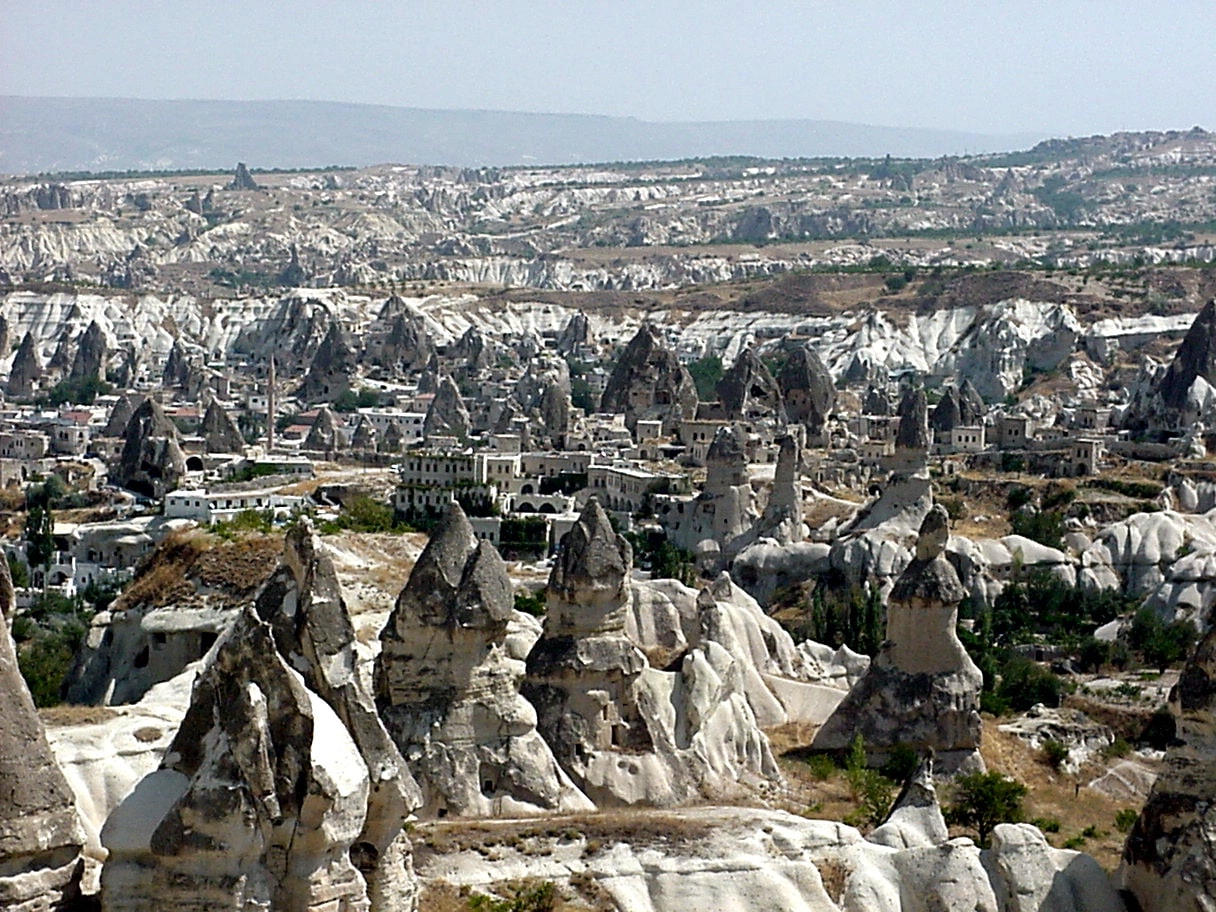 Moreover, the relationship between birds and mankind has come to an interesting point in which soiling of a flying bird on someone’s body is perceived as the sign of a good luck and auspicious. The origin of this belief, mankind’s love for birds was derived from the era of Shamanism of Turks before they converted to Islam and predominantly from the philosophy of Shamanism. This philosophy or belief has continued through the history since pre- Seljukian period.

The history of wild dove guarding in Anatolia 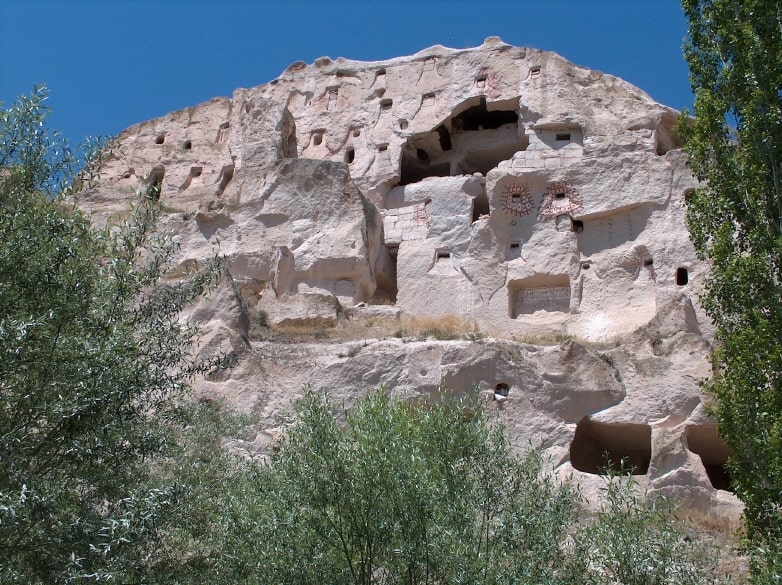 Front of a pigeon cote 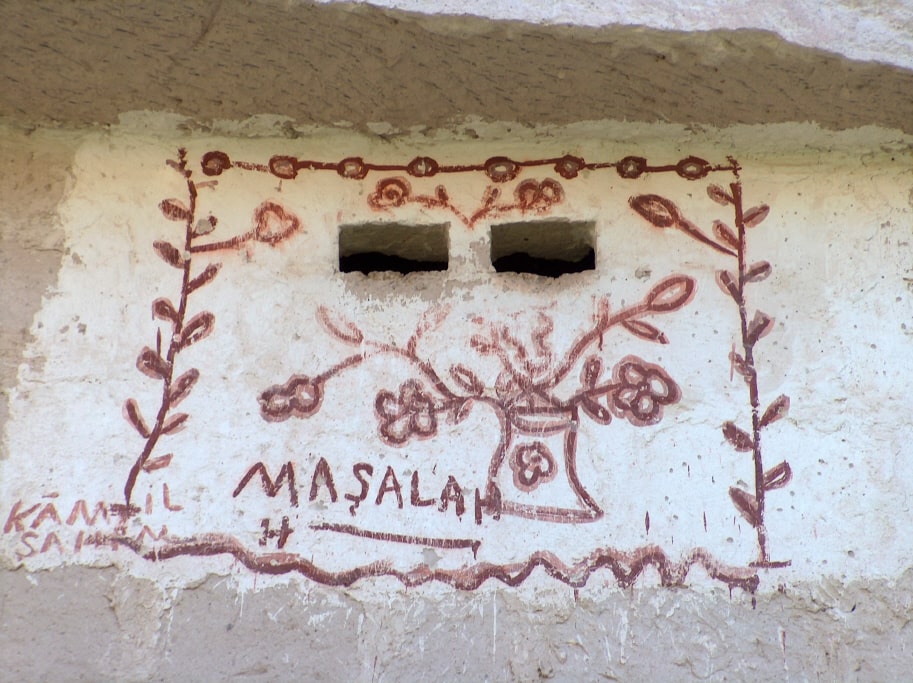 Pigeon entrance holes for the cote

Guarding doves for the need of manure:

Pigeon’s manure consists of %25 organic elements, %2 nitrogen and %1 phosphoric acid. In the Ottoman Era, the dove’s manure which was called ‘koga’ was one of the most important export materials for the country. It is possible to find many documents proving the demands of the foreign countries for dove manure, and some records displaying dove manure sales to those countries in the Ottoman archives. In the same era, it is also known that the doves’ manure was used in the vineyards in Cappadocia and its surroundings and in the planting process of watermelon in Diyarbakir.

Recently, although the dove manure is still used in the country, the artificial manure has a widespread usage. In guarding the wild pigeons some specific types of coops were needed to build for collecting their manure in a more proper way and for ensuring to accumulate them. These kinds of buildings can be seen in Cappadocia where they are named as ‘Güvercinlik’ and in Diyarbakir, named as ‘Boranhane’ indicating dovecotes.

The Pigeon Cotes of Cappadocia:

The visitors of Cappadocia usually do not pay much attention to dovecotes when they see Fairy Chimneys, Baziliquas (churches carved on the rocks), the monasteries and the fabulous underground cities. The dovecotes are relatively widespread in Cappadocia with regard to other parts of the country due to the tradition of the local farmers in which the manure has been used intensively for obtaining more productivity in the vineyards. For this aim, many dovecotes have been constructed in Cappadocia and its surroundings.

The dove cotes in Cappadocia are mostly designed like rooms which is set up by carving the rocks, but we can also come across house shape cotes which are made of stones. There are also some, but there are few, which are transformed to dovecotes by covering the front side of monasteries. The Çavuşin Church, nearby the Çavuşin Town, Kılıçlar Mother Mary Church in Göreme and the churches in Karşıbucak Valley are the unique examples of this kind of dovecotes. We are in dept to doves in the sense that they have prevented the destruction of frescoes in the churches and monasteries, which are used as a cote especially from the mankind.

The areas, which the dovecotes can mostly be seen, are Üzengi Valley in Ürgüp and Soğanlı Valley in the borders of Kayseri, which is the neighbor city of Cappadocia located in the east part of it. The cotes in Soğanlı Valley are 7-8 floors big buildings. Besides, we can see dovecotes in Kılıçlar, and Güldere Valleys in Göreme, Balkanderesi and Kızılçukur valleys in Ortahisar, and Cat Valley, nearby Nevşehir. 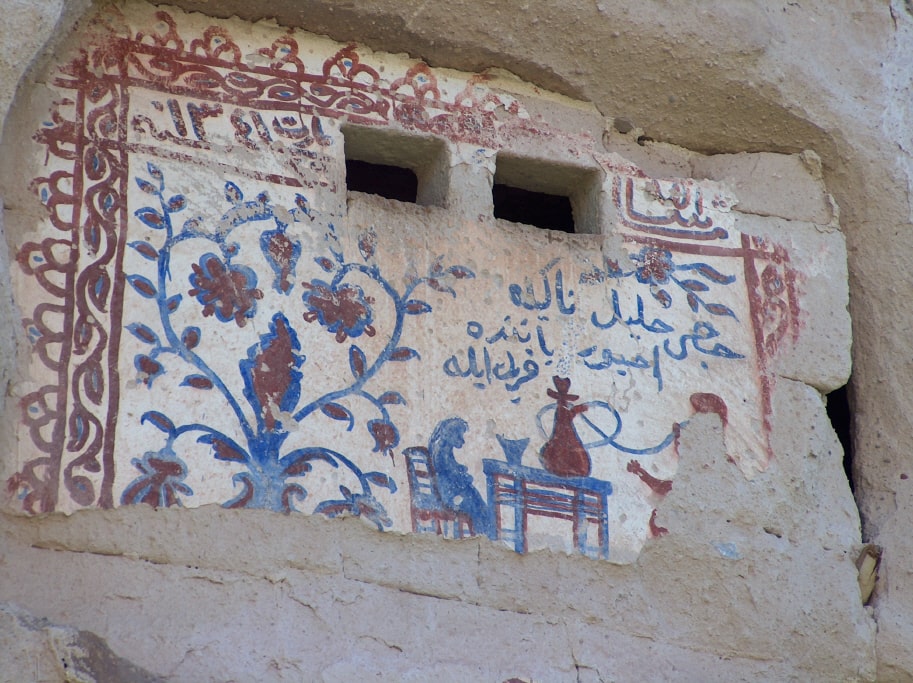 Another set of pigeon holes 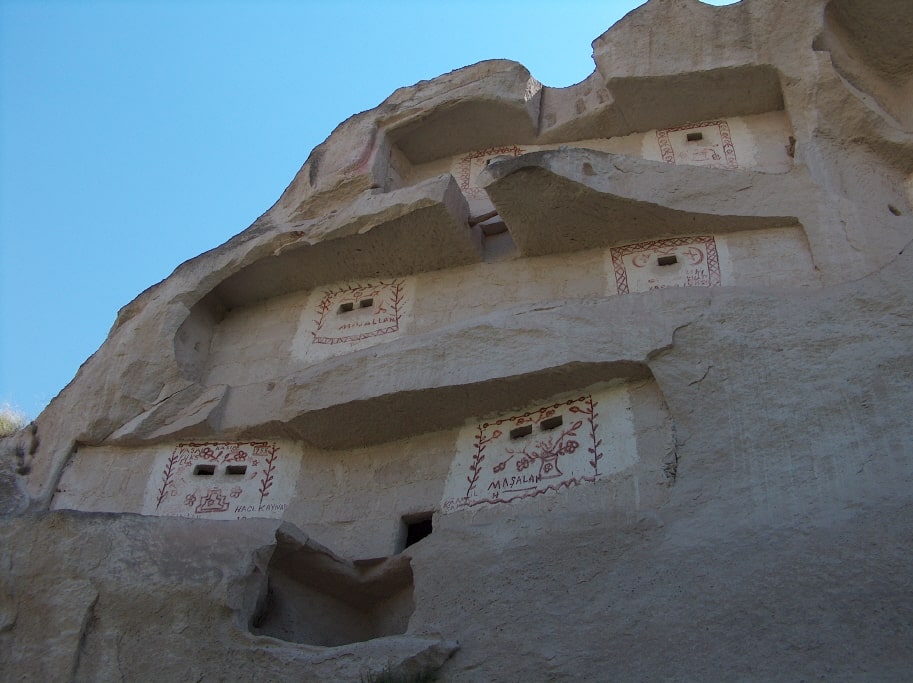 Front of another cote

The Ornaments Used in Cote Decorations:

The carpet motives are widely used in the cotes. Some geometrical figures, figures representing the social life in the region, and plant and animal figures are also used on the ornaments. Among these figures, a man smoking nargile (hookah) and a man ‘playing sword and shield’ dance are the ones that mostly draws attention. Wheel of fortune in figure was prevalently used on the dovecotes of Çavuşin, Göreme and Zelve. Apart from the wheel of fortune which used to represent the four Gods of wind in the past but currently, represents the spinning word, spinning faith and the circle of love and destiny, the life tree, the bird perching on a tree and pomegranate figures are the other figures, mostly used on the dovecotes.

The life tree signifies the path to the other world and the birds perching on a tree symbolizes the guards of the life tree, and the holly creatures that accompany human beings in their journey to the other world. Pomegranate representing the abundance and plenitude has always been accepted as a blessed fruit in Anatolia through out the history. In addition to these figures, some inscriptions written in ancient Turkish has been found in some cotes. There are calligraphies in the cotes which show the date of construction, the words like ‘Maşallah’ and ‘Allah’, and rarely the identity and profession of its owner. 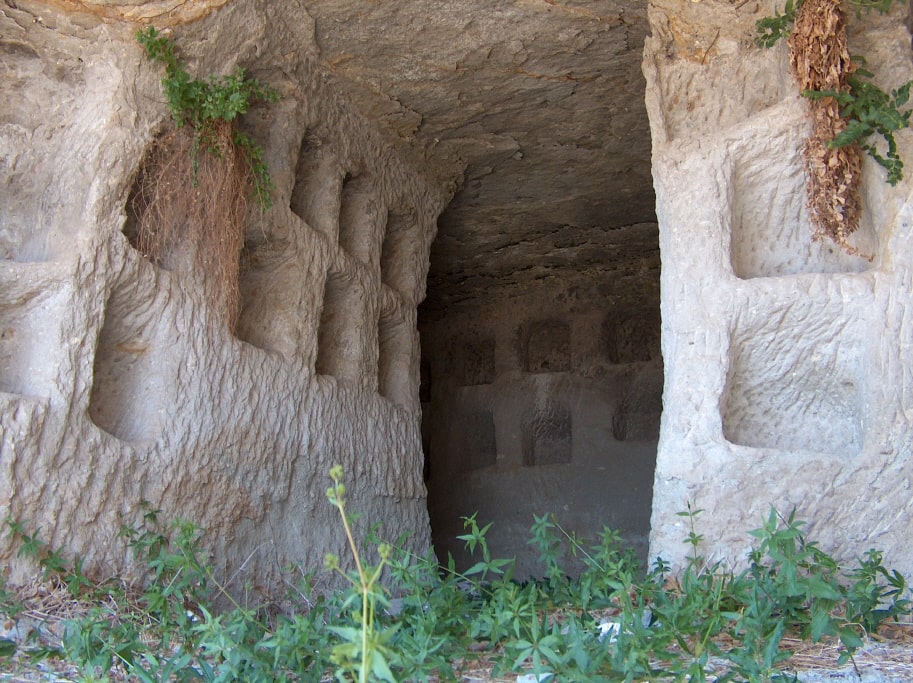 Interior of a cove. This cove's front wall had been collapsed with time. 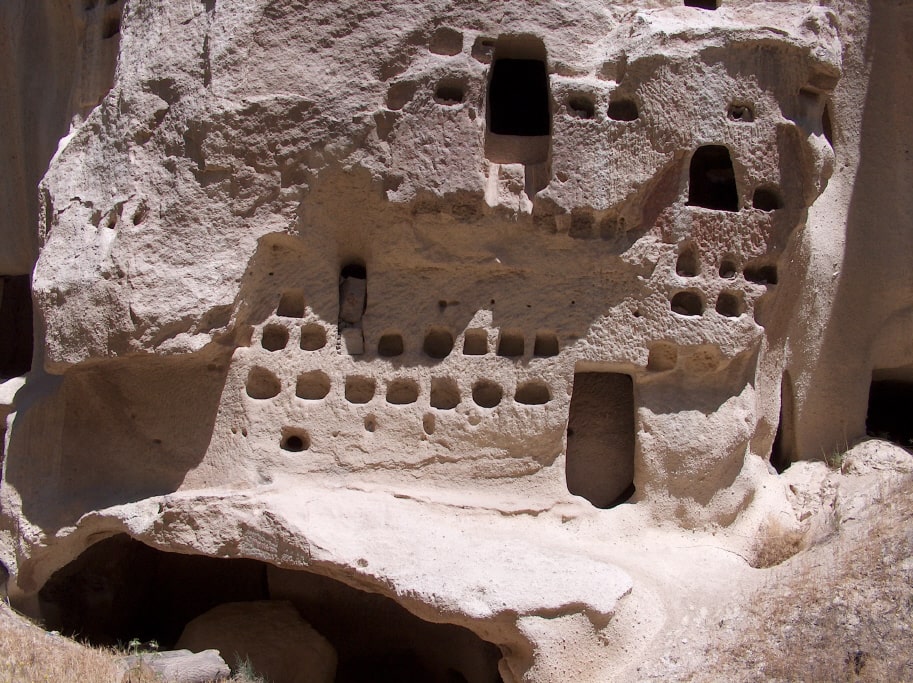 Front of one of the older cotes

The techniques used in Cote Building:

It is significantly evident that the cotes were constructed near to water sources, on a place, above the valley and their entrance, called as mouth of the cotes were mostly built in the east or south direction of valleys. By this way of construction, it was proposed to protect the cotes from cold and get sun light inside.

The cotes were generally constructed by carving the rocks as a room. The inside area of the cotes ranges from 5 to 10 m2. The outer wall has 4 or 5 holes, which is used as an entrance for doves. Cote builders used to paint around the holes in order to attract the birds. Inside the cotes, there are hollows, which allow doves to lay their eggs and are called as ‘niş.’ There are also roost poles, which lay between two walls and connect them with each other. Hence, this simple mechanism eases to collect the manure clustered on the floor. The cotes have a capacity to accommodate 100 doves.

They were built quite above the valley level and on the rocks, which prevent humans and other creatures to disturb doves. In order to protect the cote against from foxes, mousses, pine martens people use to make a mixture from plaster, white part of egg and lime and spread it to the walls for protecting the cotes. This mixture makes the surface slippery, which avoids dangerous wild animals to reach the dovecote. There is also an outside door, in the shape of a tunnel allowing a person to enter the cote for collecting manures and it is reached by means of the ladders. 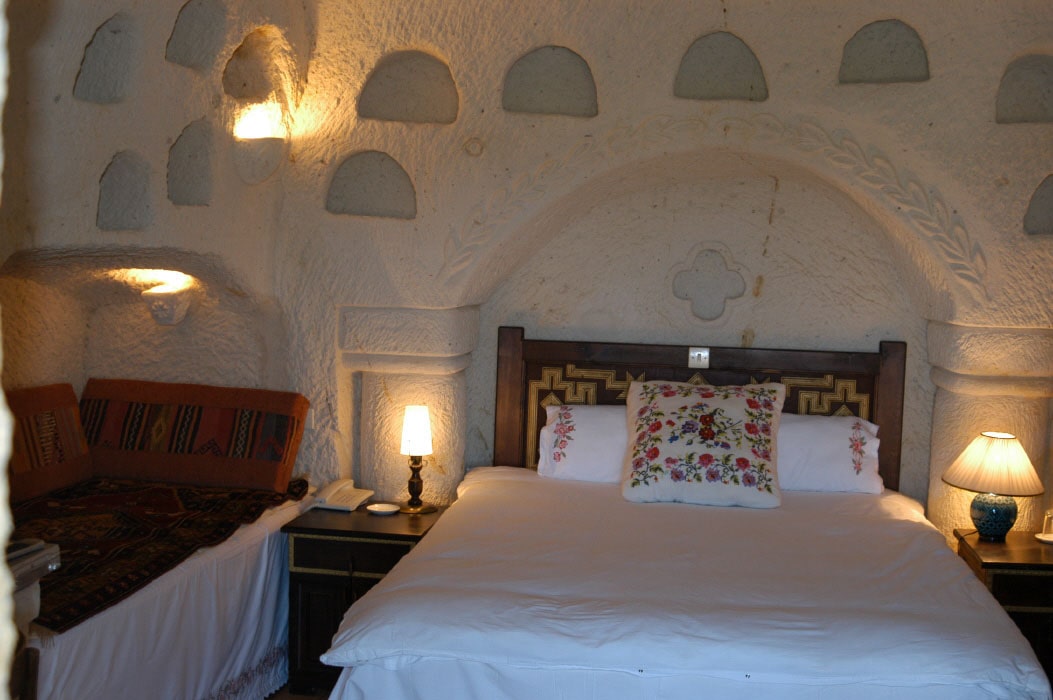 ELKEPEVİ - ÜRGÜP; A boutique hotel built in an old cote 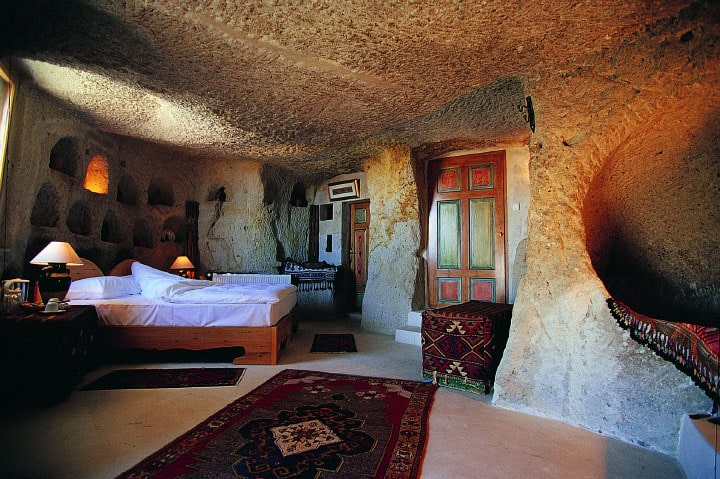 The chronicle of prominent Turkish states are: Pre-Seljuk period, the era of Principalities, The Seljuks, The Ottoman Empire and current Turkish Republic.