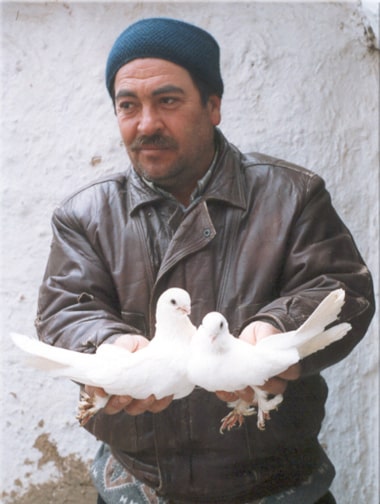 This breed largely is kept in Konya region of Turkey. It is one of the old native breeds and thought to be brought over with the Seljuk Turks. Around 1000 years it has been known in Turkey as the "pirinç dıkdık" (rice beak). This name was given to them because of their small beaks. Today, their number is very limited. It is almost impossible to see them outside of Konya. Even in Konya they are kept by some of the oldest fanciers only.

Because of this it is endangered and must be immediately put under protection. Since it is not known in the world pigeon community, its name never is mentioned. Konya municipality's website has a large section on the pigeon culture of the city. While it's noted that the pigeon keeping is an old tradition of the city, neither taklambaç nor selçuk breeds are mentioned in it. This is interesting but also worrisome.

Taklambaç breed is a strait performer. They perform in single tumbles while flying. There are also some birds that do not tumble. However, tumbling is a preferred quality in this breed. Even though, this is a muffed breed occasionally, it is possible to see a clean legged bird. These birds are thought to be mutts and considered valueless. During flight, they do not go up as high as the Turkish tumblers but fly in mid altitude around an hour. If given steady training they can fly higher and longer like the taklas. However, they do not perform like the taklas diving and climbing combinations.

In this breed the beak is small, thick, and wide shaped. Because of this, they are thought to be relatives of Mısıri (Güllü, Bango). However, since physically they do not carry any chest rose, are muffed, and have small eyes they differ from these breeds. They also have a larger body structure compared to Bangos. Besides these they are tumblers, a quality does not exist in Bangos.

They are tight feathered. Their tails are normal shape and consists of 12 to 16 feathers. ones with more then 12 tail feathers are not preferred by fanciers. They can be crested or plain headed. They have rather small eyes. They can be many colors, and these consists of many different combinations of black and white colorations. The local names for these colors are Aktaklambaç, karataklambaç, karakafa, karakuyruk, karakafa karakuyruk, çallı taklambaç and kırgın. There are also some sub variations of each color marking. 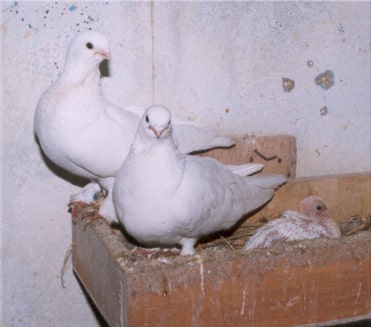 Ak taklambaç:This is a white-self bird. At times they can have a black marking on the back. These birds are called "beli kara" (black back). They can also come with alternating black and white feathers on the tail which are called "ebrulu" (marbled).Kara taklambaç: This is a black-self bird. Black coloring can be in a light tone and dull. These kinds of birds are not considered to be valuable. They are called "boz zidgara" (gray anti-black). They can also have small white freckles on top of the head called "cimke" and these birds are called "çakal zidgara" (jackal anti-black).

Karakafa:This is a white bird with completely black head. Black head marking should not spill below the neckline. These birds are also known as "ala" (pied). If the white of the karakafa birds run into the black, these birds are called "kız alası" (girlish pie).

Karakuyruk:This bird's tail is completely black. The rest of the body is white but the spot on the back called "kalp yamalı" (heart patch) which is black. The same bird is also known as the "karakuyruk alası" (black tail pied). If karakuyruk has a black marking running down from the shoulder to the chest it is called "Peşkirli" (Napkin, bib).

Karakafa karakuyruk:This is a bird with head and the tail colored black and the rest of the bird is white. Sometimes, the common tail bar shows in white in these birds. These types of birds are called "fenerli" (lighted).

Çallı taklambaç:These birds come with body completely black and the wings white color. These birds’ eyes come in what we call "çakır" which is blue with gray lines running through it. This coloring takes place on both eyes and the birds are called "kuyruğu siyah çallı".

Kırgın:This is a patched color bird with black and white markings distributed through the body without any coordination and these birds are considered to be with out any value.

During my research in Konya, I noticed the decline of this breed clearly. They are not popular and only kept by old fanciers of the city. In the pigeon market of Konya, which is set inside the "Muhacir Pazarı", I could only see four representatives of this breed. The dominant breed in the market is the Turkish tumbler. Even though, I am told taklambaç is kept more widely then Selçuks, the color selection is visibly declined over the years. I could only see the ak, karakuyruk and kırgın types. I think the other colors are either not common or just extinct. I have gathered most of my information and the photos from Mr. Atila of Konya.